The European Parliament’s Committee on International Trade held its meeting on 21-22 March.

On the Corporate Sustainability Due Diligence Directive proposal of February 2022, the following was noted from members of the European Parliament:

-Commission is preparing a proposal on restricting products made from forced labour legislative (market restriction) before September 2022.

Ms Salla SAASTAMOINEN (Director, DG JUST) reported on the legal obligations to the companies, and responded to questions from MEPs:

-The choice of scope in terms of the companies covered would cover 50% of the market, which is significant even if SMEs are not covered.

-Additional administrative burden would not be heavier for companies as a result of this proposal compared to the Non-Financial Reporting Directive (NFRD).

-The proposal will increase the number of companies subject to due diligence proposals as the national legislative measures on due diligence in France and Germany would only cover 40% of the companies in the scope of the EU due diligence directive, so the directive is critical to ensure the remaining 60% are covered.

-In terms of the section of the sectors, this was guided by the OECD guidance for multinational companies, covering the sectors with the greatest risk to causing human rights and environmental harm.

-Company law area of the EU treaties only allow for the Commission to propose directives, hence why the proposal is not a regulation.

Ms Valentina SUPERTI (Director, DG GROW) reported on the balance struck by the proposal and responded to questions from MEPs:

-This proposal also covers forced labour, as there is reference to the ILO conventions in one of the annexes.

-No inclusion of a product ban, but such a consideration (e.g., product withdrawal) would be covered under a forced labour proposal, but these two proposals aim to strike the right balance on these considerations.

-On the question of the lead DG for the for forced labour proposal, this could involve, GD GROW, DG TAXUD, and DG TRADE, given the various considerations and legal areas at hand. 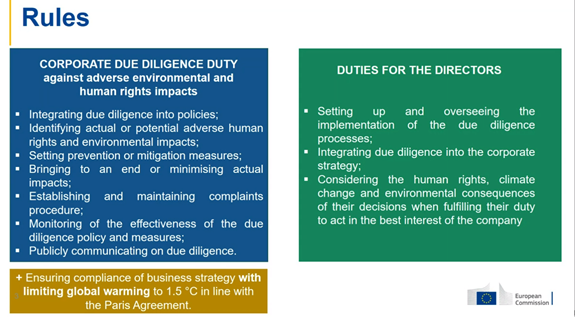 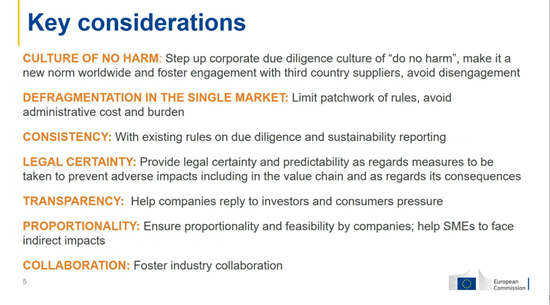